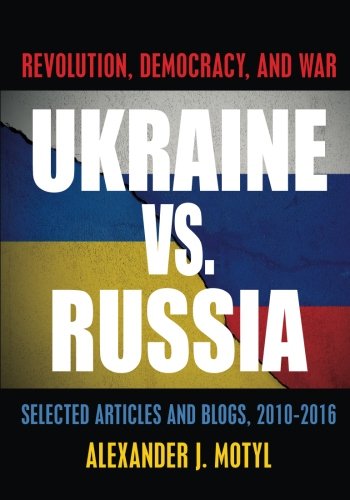 Ukraine vs. Russia offers indispensable background knowledge and analysis on one of the most important issues of the day—Vladimir Putin’s war against democrat¬ic Ukraine. Alexander J. Motyl’s articles and blogs offer in-depth analysis as well as a running commentary on current events and historical controversies in both Russia and Ukraine—from the rise of Ukrainian dictator Viktor Yanukovych to the impending fall of Russian dictator Putin. Motyl discusses politics, society, cul¬ture, economics, history, language, and memory and shows how they relate to the Russo-Ukrainian War and to Western understanding—and misunderstanding—of Ukraine and Russia. As Washington considers a policy shift toward Russia and Ukraine, Western policy¬makers and analysts would be well-advised to consult this important volume.

Alexander J. Motyl is professor of political science at Rutgers University-Newark. A specialist on Ukraine, Russia, and the USSR, and on nationalism, revolutions, em¬pires, and theory, he is the author of Imperial Ends: The Decay, Collapse, and Revival of Empires; Revolutions, Nations, Empires: Conceptual Limits and Theoretical Possi¬bilities; Dilemmas of Independence: Ukraine after Totalitarianism; Sovietology, Ratio¬nality, Nationality: Coming to Grips with Nationalism in the USSR; Will the Non Rus¬sians Rebel? State, Ethnicity, and Stability in the USSR; The Turn to the Right: The Ideological Origins and Development of Ukrainian Nationalism, 1919 1929, the editor of The Encyclopedia of Nationalism, and the co-editor of The Holodomor Reader: A Sourcebook on the Famine of 1932-1933 in Ukraine and The Great West Ukrainian Prison Massacre of 1941: A Sourcebook.

Related Posts
Providing The Public Of Marriage Records Free
In spite the swelling of the annulment statistics in America, the wish to tie the…
Contracts Texts: Restatement 2d Contracts, UCC Article 2 & the CISG
This handsome 700 page paperback volume brings to you the full richness of these primary…
NYC Divorce Records Important Facts
Are you having a hard time looking for NYC Divorce Records? If you were, then…