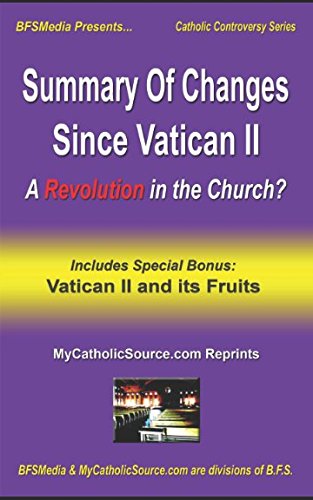 “All in all, it is quite clear that much has been lost since the Second Vatican Council. It used to be that Catholics were united in belief and worship, they could go anywhere in the world and feel at home at Mass, prelates were orthodox, priests weren’t afraid to talk about sin and hell and they didn’t experiment with the liturgy, the Blessed Sacrament was treated with great reverence, our Blessed Mother was revered, Catholics obeyed the priests, bishops and the pope, teachers were orthodox, books with imprimaturs were ‘safe’, most Catholics knew and practiced their faith, lay persons didn’t try to usurp priestly duties, dissenters were punished, the sense of sin was clear, people believed in the devil and knew that ‘the whole world is under the power of the evil one’ (1 Jn. 5:19), priests were available, Mass – a solemn sacrifice – was focused on God and was not an occasion for socializing, self-affirmation, or entertainment, Masses were reverent, not manipulated, and kneeling & genuflection for our Lord was required, parishioners were well-dressed, modest, and had manners, all was orderly and respectful, fear of the Lord was fostered and pleasing God was paramount, Catholics rejected Protestant errors, heresy was anathematized, churches were beautiful, tabernacles were prominent. A Catholic Mass was uplifting and was distinctly different from Protestant services. The Church was not worldly. She was known to be divine and not subject to change to suit the ‘majority’.” (Vatican II and its Fruits)

If you love the Church, you won’t want to miss this ‘enlightening, fact-filled compendium’ of changes in the Church since the Second Vatican Council.

* Well over 50 links for more information

* Have the Changes Been Good?

* Does God Desire the Changes?

* Isn’t the Church Allowed to Change?

Even popes have admitted a ‘crisis’ in the Church has occurred since the Second Vatican Council, yet we are also told that things are “better since the Council.” However, facts don’t lie.

Whether you’re a ‘newbie’ or a seasoned Vatican II observer, you won’t want to miss this ‘informative & handy’ reference publication.

Get your copy today. And purchase an extra copy to share!

Notice: Both reprints are based on online versions of MyCatholicSource.com articles. Various items may differ from originals. Items contained within the articles are not comprehensive. Items may be regional, “in general”, relative, etc. There may be some similarity / equivalence among changes and fruits. Certain items may not apply in places where sacraments are offered according to the traditional rites.

Also Note: These articles only briefly deal with various changes to the Mass in the wake of the Second Vatican Council. For more detail regarding changes made to the Holy Sacrifice of the Mass since Vatican II, look for our other article reprint which deals specifically with this matter.

The Article Book: Practice toward Mastering a, an, and the
A comprehensive guide and workbook for improving ESL/EFL students’ understanding of English articles, The Article Book can be used as either a supplement to any... Heralding Article 25: A People’s Strategy for World Transformation
In this pioneering analysis of world problems, Mohammed Mesbahi argues that meeting the basic entitlements outlined in Article 25 of the Universal Declaration of Human... The ABCs of the UCC Article 4A: Funds Transfers
Article 4A brings certainty to funds transfers and provides rules that foster speed, security, and low cost. This book is an intro to Article 4A... The Complete Guide to Article Writing: How to Write Successful Articles for Online and Print Markets
Master the art of article writing! The world of journalism is changing rapidly, and the modern journalist needs more than a basic knowledge of article... HBR’s 10 Must Reads on Managing Across Cultures (with featured article “Cultural Intelligence” by P. Christopher Earley and Elaine Mosakowski)
Put an end to miscommunication and inefficiencyand tap into the strengths of your diverse team.If you read nothing else on managing across cultures, read these...
Related Posts
Writing Vivid Emotions: Professional Techniques for Fiction Authors (Writer’s Craft) (Volume 22)
Do you want your characters to feel such strong emotions that the readers' scalps prickle,…
Select Your Ideal Web Designer – WEB DESIGN COMPANY ILLINOIS
It is adverse thinking to state that as of today greater than 1 billion web…
Burn After Writing; How Honest Can You Be When No One Is Watching
The world has become one giant confessional. In a reversal of this trend, Burn After…