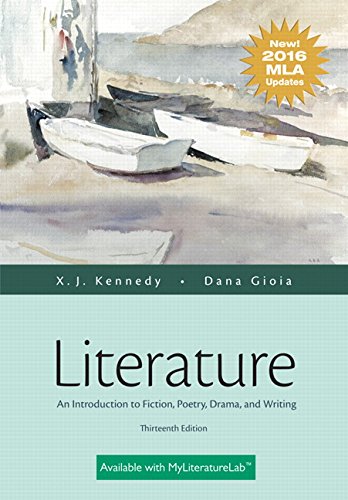 For introductory courses in Literature.
This version of Literature: An Introduction to Fiction, Poetry, Drama, and Writing has been updated the reflect the 8th edition of the MLA Handbook (April 2016)*

Cultivate a Love of Literature…
X.J. Kennedy & Dana Gioia developed Literature: An Introduction to Fiction, Poetry, Drama, and Writing, 13/e with two major goals in mind: to introduce college students to the appreciation and experience of literature in its major forms and to develop the student’s ability to think critically and communicate effectively through writing.  The book is built on the assumption that great literature can enrich and enlarge the lives it touches. Both editors, literary writers themselves, believe that textbooks should be not only informative and accurate but also lively, accessible, and engaging.

* The 8th edition introduces sweeping changes to the philosophy and details of MLA works cited entries. Responding to the “increasing mobility of texts,” MLA now encourages writers to focus on the process of crafting the citation, beginning with the same questions for any source. These changes, then, align with current best practices in the teaching of writing which privilege inquiry and critical thinking over rote recall and rule-following.

Thanks for stopping by!!!